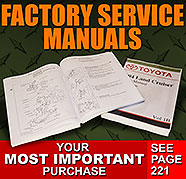 The Land Cruiser has become a legend in the 50 years since it first arrived in Australia, making major contributions to national development particularly in the outback. The Land Cruiser has earned the reputation for reliability and durability that has made it the choice vehicle for uses ranging from private leisure to industrial workhorse.

In 2010 Takeshi Namba visited America. While in America he visited SOR and participated in Cruise Moab 2010. Click the link to see the SOR and Cruise Moab articles from the Japanese magazine Cruiser's Mind.

The 4WD that never breaks down, the safest vehicle to entrust your life – that’s the Land Cruiser’s world-renowned reputation. Even those who don’t know much about cars recognize the name Land Cruiser. Since production began in 1951, over 5 million have been shipped worldwide. There is nowhere in the world the Land Cruiser is not on stage.

"The most durable 4WD in the world, the safest vehicle to entrust your life" There is no place on the globe where you can go and not see a Land Cruiser. The more extreme the environment, the more active the role Land Cruiser plays'－that's the reputation of the Toyota Land Cruiser.

Currently there are two clearly separate lines of Land Cruiser. One is the 200 series. The other line is the world's work horse, the much-abused 70 series. They are an essential tool in the daily lives of people across the plains of Africa, the deserts of the Middle East, the vast Australian outback and for the United Nations, too. The 70 series Land Cruiser provides durability that meets every demand from customers in the most extreme environments around the world, and the absolute reliability that brings them safely home no matter the obstacles.

The 70 series will be celebrating its 30th anniversary in November, 2014. To commemorate this historic occasion, this DVD documentary will showcase scenes of the 70 series at work and play around the world, as well as tracing how 70 series reliability and durability was built over the past 30 years and will show the viewer everything about the 70 series, the conservative mainstream of Land Cruiser.

LAND CRUSIER HISTORY CD - Interactive CD-ROM for MS Windows featuring Land Cruiser advertising films from the 1950s. Sections include design and assembly films from Araco Body Company as well as off-road driving clips. Also features short stories and a chronology of Land Cruisers from all over the world. A truly unique perspective on this automobile legend. Run time approx 25 minutes. Makes a great gift. Compatible with Microsoft Windows 2000 and above.

Traveling through 4 Provinces and 6 States. Deep underground in Saskatoon to witness Land Cruisers enduring the dark salty world of a potash mine to the amazing collection of Land Cruisers at Specter Off-Road in California. Even a visit with Albert Podell. Albert Podell and Harold Stephens hold the record for the longest overland trip, and yes they traveled in none other than a Land Cruiser.